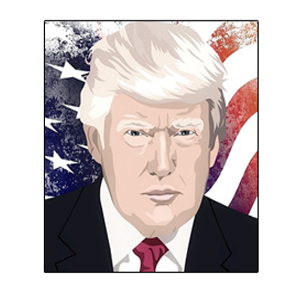 New York, NY: The COVID-19 pandemic in the U.S. appears to be peaking and moving into a potentially less virulent phase. The social distancing Americans have adhered to since March and heroic performance by healthcare workers have knocked down the spread of the disease and opened the door to a phased return of the country’s economic, social and community life.

Time will tell how well this works. There is still a long road to travel with many unanswered questions about the behavior of the virus that will determine what happens in the weeks and months ahead. However, I do not think more time is needed to grade Donald Trump’s performance in response to this crisis.

As I write, deaths in the U.S. from COVID-19 are approaching 50,000. By comparison, fewer than 500 people have died from the disease in South Korea. Why use South Korea to compare? It’s because, as of late February, neither the U.S. nor South Korea had recorded a first death from COVID-19, and also because the two countries have pursued radically different approaches to managing the outbreak. From the beginning, South Korea mounted an aggressive, nationally directed approach to managing the pandemic. It stressed extensive social distancing, testing, contact tracing – all the steps that have proven effective in containing the outbreak.

By contrast, from the earliest indication that COVID-19 was a threat to the U.S., Donald Trump chose to deny it, minimize it, pretend it is under control, lie about it, and most recently, shift blame for the deadly spread of the disease to everyone and everything but himself and his administration’s decision making. Rest assured that, should summer sun and humidity drive the disease down, or that one or more of the many therapies now being tested prove to be life-saving treatments, Trump will step forward to claim full credit, and remind us that he “knew all along” it would work this way.

The facts are that, under Trump’s direction, the federal government’s COVID-19 public health response, from distributing protective equipment and ventilators, to ordering production of more, to testing for those with the disease and those who might spread it, has been halting, patchwork and reactive. As a result, thousands of lives have been lost that more competent, decisive action might have saved.

This record is a history Donald Trump cannot spin or rewrite, try though he will in his pursuit of a second term in office. The verdict on Trump’s coronavirus response will be rendered in November. There is only one message to send from the voting booth: “You’re fired.”