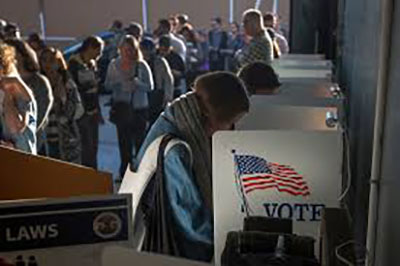 New York, NY: The Presidential race is heading for the finish line. Between now and election day there will be three Presidential debates, one Vice Presidential debate and who knows how many controversies and surprises to occupy the headlines. At this point, it seems hard to know what might actually count as a “surprise.” In this year of COVID and controversy that has further split an already divided country, we understand almost anything can happen and probably will.

But amidst all the uncertainty, there are a few things that do seem pretty clear. While there is much talk about the undecided voter, and given the context of Trump’s narrowest of wins in 2016 that’s perfectly reasonable, it is also the case that almost everyone who has a vote knows right now for whom they will cast their ballot.

Almost no matter what happens in the next 60 days, those decisions aren’t changing. Do you know anyone who is still on the fence? Have you tried to talk a Trump supporter out of his or her choice, or a Biden voter into switching to Trump?

Despite the hundreds of millions that will be spent on everything from TV ads to T-shirts between now and November to win the hearts and minds of those few who have yet to decide and hold the allegiance of those who have made their choice, what matters most now is only this: Which campaign has the organization to make sure their voters get to the polls?

This is the least visible part of the campaign and, as such, it gets the least media attention. It is easy to put cameras in front of a speech or a rally, but not so easy to dig out the details of an organization’s “ground game.”  But make no mistake, from making sure that vote by mail works the way it is supposed to (a key challenge in 2020) to assigning people to physically get seniors to the polls, turnout is all that matters now.