I like Starbucks coffee. We buy it by the bag (Espresso), ground for a paper filter, and brew it at home. I don’t like standing in line in a Starbucks store, and I really don’t like the prices. So it was with mixed feelings recently that I watched former Starbucks CEO Howard Schultz roll out his exploratory third party presidential bid. 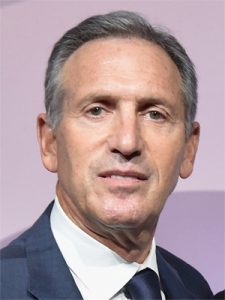 Any conflict I had went away when I heard his first ideas about what we need to do in this country. In the “60 Minutes” interview that opened his campaign as a “centrist independent”, some of the first words out of his mouth included “debt” and “deficit”, and he underlined that one of his priorities will be finding ways and means to deal with the more than 22 trillion-dollar national debt and trillion-dollar-plus federal budget deficits. It’s a challenge that both Democrats and Republicans have been avoiding for years. He then moved on to the need to address healthcare in a realistic way, and I was intrigued.

Here was the message I had been waiting to hear, and I do not think I was alone.

I am, in microcosm, pretty much the voter Schultz is courting from the center-left and center-right of the political spectrum. I am a lifelong Democrat who admires the energy to the left of me in the party but can’t see quite how we pay for it more costly notions on healthcare, education and guaranteed incomes for all. I also believe there are many in the Republican party, worn out by Donald Trump’s personal and policy excesses, that are paying attention, too.

So when Howard Schultz says, in so many words, “A pox on both parties. They’ve lost their way. It’s time to roll up our sleeves and get real,” he’s tapping into what I think is a potentially large audience that might just be responsive to his message as the campaign unfolds in coming months.

Having said that, it’s an almost impossible long shot that Schultz will attract enough support to win the White House. Third party candidates elect other people, not themselves. Schultz signaled he knows that. He was clear that his goal in running was to deny Donald Trump a second term, and that if his candidacy appeared to make that more likely, he will get out of the race. Democrats urging him to get out now apparently didn’t hear that part of his announcement.

So what’s important about Howard Schultz if he can’t win? For me, it’s about the messaging. His candidacy gives a chance for discussion of important issues this country is facing — crushing debt and yawning deficits, real national security problems such as cyberthreats, practical ways to improve healthcare and education, generate sustainable economic growth and restore respect for the rule of law.

If he can trigger a serious dialogue on even some of these topics, Howard Schultz will perform a great public service. I’m rooting for him on that score. And who knows? He may catch fire and galvanize a sizeable constituency. So I am happy to see Howard Schultz in the presidential race even though I fully expect, at some point, to see him acknowledge that he can’t win and urge his supporters to vote for the Democratic candidate. Until then, I say: “Go, Howard, Go.” I’ll be listening, and it will be interesting to find out how many like me there are. I have a hunch it could be lots more than many pundits think.